June 25th is the official International Maritime Organisation Day of the Seafarer and this year, 2014 was accompanied with the campaign hashtag #thankyouseafarers.

“Think of something you own and which came by sea. Whether it’s the car you drive, the food you eat, the clothes you wear, the gadgets you use or the furniture you sit on, write it down and post it, adding the hash tag “thank you seafarer.” If you can also post a photo or video, even better,” said IMO secretary-general Koji Sekimizu. 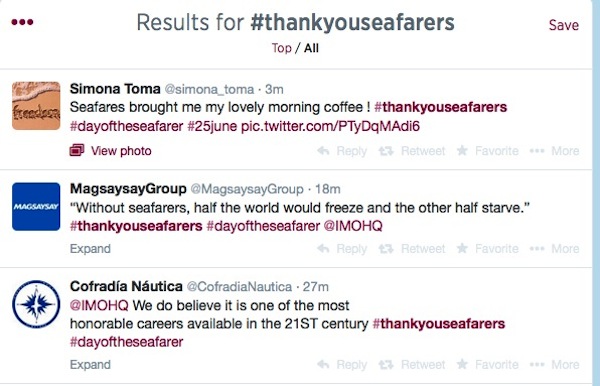 In addition, IMO has posted a video paying tribute to the world’s 1.5 million seafarers.

The Maritime Piracy Human Response Programme also called on the industry to remember the bravery of seafarers being attacked and kidnapped by pirates last year and the 38 seafarers still held hostage around the world.

Though it’s not everyday that we celebrate a special day, it should come to mind the hardships that seafarers are going through from their maritime training up to the point of making us proud during their voyages on the sea.

To all the seafarer’s braving the waters around the globe, a salute to you!

This website uses cookies to improve your experience while you navigate through the website. Out of these, the cookies that are categorized as necessary are stored on your browser as they are essential for the working of basic functionalities of the website. We also use third-party cookies that help us analyze and understand how you use this website. These cookies will be stored in your browser only with your consent. You also have the option to opt-out of these cookies. But opting out of some of these cookies may affect your browsing experience.
Necessary Always Enabled

Any cookies that may not be particularly necessary for the website to function and is used specifically to collect user personal data via analytics, ads, other embedded contents are termed as non-necessary cookies. It is mandatory to procure user consent prior to running these cookies on your website.